Open Mic nights are a way you can gain valuable experience as a performer and get your voice out there in a friendly and relaxed environment. This article will tell you what an open mic night is, what to expect, how to find one, and how you can participate effectively in the experience.

Music comes alive through performance! Sometimes, one performance can be as valuable as ten voice lessons, because it teaches you a lot about yourself and about what is necessary to improve as a singer. You can’t learn this knowledge from a book or by thinking about it.

Performance is knowledge in action. There really is no substitute.

Some singers are happy to attend lessons each week and never subject themselves to the challenge of performing – that’s like training as a football player and never actually playing a game. On the other hand, other singers spend all their time performing and never work on their vocal technique unless something goes.

Are you making any of those mistakes? To be the best singer you can be, your training must be balanced and involve a combination of performing, listening, musical development, and technical development.

A great performance doesn’t need to be a ticketed event with you stepping out on stage to a large crowd of adoring fans. There are many informal opportunities for you to perform and open mic nights are just one of these. 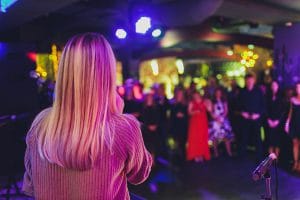 What are Open Mic Nights?

Many artists and performers got their start performing at the local pub or at informal settings.

Open Mic nights are fun, friendly gigs held at local bars and cafes where the audience are the performers. Open Mic nights can give you the opportunity to perform on your own or with others in a supportive environment. The difference between an open mic night and karaoke is the focus on live performance rather than using pre-recorded tracks.

There are various formats for an open mic night. Sometimes they are more formal, where the acts are announced and where you need to put your name down in advance. Other times, they are completely informal, where you turn up on the night and the performers will take turns to get up and do their thing.

Sometimes, the venue will provide a sound system, backing band, or accompanist for you.  Other times, the musicians who attend on the night will be your backing band.

Some venues charge a small fee at the door to sign up. Usually, this is a flat rate, or it’s done through a drink or food minimum.  Other venues, don’t have a cover charge but encourage participants and audience to order from the bar or restaurant where the open mic is held.

Ready to get started? Here are some suggestions for how to find some open mic nights close to you: 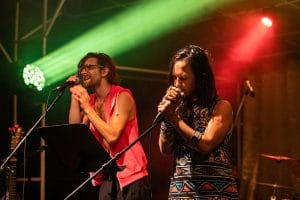 Every venue has a system for performers to sign up, so pay close attention to the sign-up time and the preferred method. Some of the common methods are through a website; by texting, emailing, or calling; or on a list at the venue prior to the show.  Often venues require performers to show up 15–30 minutes early. Performances will run either in order of sign-up or draw names randomly from a bucket. There is most likely a cap on the number of performers.

An open mic night is not the time to try something for the first time. It’s fine to have a song that you’re working on and want feedback on, but you should aim to sing something that’s at least a little more polished.

Have a chart (sheet music) for your songs and make sure your music is in the correct key, marked up, in a folder, and easy for your musicians to read. Know your key. Know what tempo you’re singing at and the form of your performance. Practice your verbal introduction and be able to count your musicians in or tell them what introduction you want.

Also, bring more than one song. If the previous singers perform slow ballads, you’re better off doing something contrasting to keep your audience and band members awake.

3. Keep it short and simple

We don’t need to hear all 16 verses of Leonard Cohen’s Hallelujah and we don’t need to hear a story of every deeply personal event that inspired you to write your original song. The audience will love you more if you sing and talk less. Keep the focus on sharing and being part of a shared experience.

4. Don’t make it all about you

Consider turning up and supporting an open mic night a couple of times even before you first perform. It’s also a good way to get a feel for how the night runs. If you do sing, stay on and support the other singers. It’s rude to leave early.

Open mic nights are not a place for you to “get discovered”. It’s a chance for you to workshop and interact with other musicians. Use it as an opportunity to network and to get into the work.

The band wants to play WITH you, not FOR you. Don’t treat them like second-class citizens. Invite them to take a solo, or participate with you in some way. Keep eye contact with them – especially for your ending.

Thank your band and the audience after your performance. Consider asking them for feedback.

Open mic nights are a great way you can practice your craft, learn by doing and also learn by observing other performers. So be brave and get out there and support live music in your local community.

Dr. Darren Wicks is the founder of Total Voice Studio. He is a voice educator, jazz pianist and choral conductor. Darren is passionate about working with singers and mentoring teachers. With a career spanning 25 years, Darren brings a wealth of knowledge and experience to his teaching. His experience includes work as a high school music teacher; a university lecturer, work with community music groups; studio teaching; school and community choirs; amateur musical theatre and teacher education.
All Posts »
PrevPreviousIncredible Singing Transformation
NextSongs for Boys – Aged 8 – 13Next